Celebrations may be in order for Bicycle Therapeutics plc (NASDAQ:BCYC) shareholders, with the analysts delivering a significant upgrade to their statutory estimates for the company. The revenue forecast for next year has experienced a facelift, with analysts now much more optimistic on its sales pipeline.

Following the latest upgrade, the current consensus, from the seven analysts covering Bicycle Therapeutics, is for revenues of US$9.9m in 2021, which would reflect a chunky 16% reduction in Bicycle Therapeutics’ sales over the past 12 months. Before the latest update, the analysts were foreseeing US$8.3m of revenue in 2021. The consensus has definitely become more optimistic, showing a nice gain to revenue forecasts. 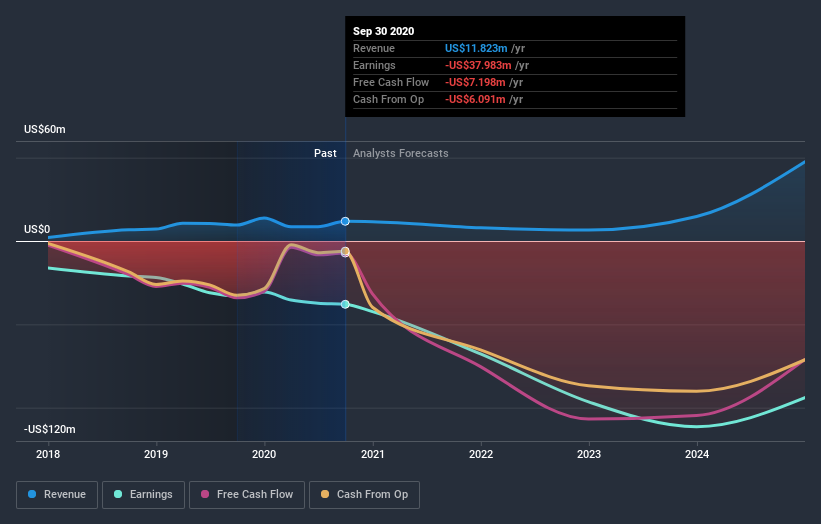 The consensus price target rose 8.4% to US$27.71, with the analysts clearly more optimistic about Bicycle Therapeutics’ prospects following this update. Fixating on a single price target can be unwise though, since the consensus target is effectively the average of analyst price targets. As a result, some investors like to look at the range of estimates to see if there are any diverging opinions on the company’s valuation. The most optimistic Bicycle Therapeutics analyst has a price target of US$35.00 per share, while the most pessimistic values it at US$22.00. There are definitely some different views on the stock, but the range of estimates is not wide enough as to imply that the situation is unforecastable, in our view.

Another way we can view these estimates is in the context of the bigger picture, such as how the forecasts stack up against past performance, and whether forecasts are more or less bullish relative to other companies in the industry. These estimates imply that sales are expected to slow, with a forecast revenue decline of 16%, a significant reduction from annual growth of 31% over the last three years. Compare this with our data, which suggests that other companies in the same industry are, in aggregate, expected to see their revenue grow 21% next year. It’s pretty clear that Bicycle Therapeutics’ revenues are expected to perform substantially worse than the wider industry.

The highlight for us was that analysts increased their revenue forecasts for Bicycle Therapeutics next year. They’re also anticipating slower revenue growth than the wider market. There was also a nice increase in the price target, with analysts apparently feeling that the intrinsic value of the business is improving. Given that analysts appear to be expecting substantial improvement in the sales pipeline, now could be the right time to take another look at Bicycle Therapeutics.

Analysts are definitely bullish on Bicycle Therapeutics, but no company is perfect. Indeed, you should know that there are several potential concerns to be aware of, including dilutive stock issuance over the past year. For more information, you can click through to our platform to learn more about this and the 2 other warning signs we’ve identified .

Of course, seeing company management invest large sums of money in a stock can be just

Penske Automotive Group, Inc. (PAG – Free Report) reported first-quarter 2020 adjusted earnings per share of 64 cents, in line with the Zacks Consensus Estimate. However, the bottom line declined from $1.25 per share recorded in the year-ago quarter. The auto retailer posted revenues of $5,009.1 million, surpassing the consensus mark of $4,868 million. However, the top line declined from the year-ago level of $5,564 million. Heightened coronavirus woes, especially in March, resulted in weaker year-over-year earnings and revenues.

The company’s gross profit decreased to $776.7 million from $851.5 million in the prior-year quarter. During the quarter under review, operating income fell 33% from the prior-year period to $106.4 million.

Revenues in Retail Automotive slipped to $4,416.6 million from $5,091.2 million in the year-ago quarter. Gross profit of $678.1 million compared unfavorably with $761.5 million in first-quarter 2019. However, the metric topped the Zacks Consensus Estimate of $617 million.

Revenues in the Commercial Vehicles Australia/Power Systems and Other declined to $101.1 million from $140.9 million in the prior-year quarter. Gross profit was $29.8 million compared with $35.6 million in the first quarter of 2019. The reported figure also missed the Zacks Consensus Estimate of $34.20 million.

To counter the pandemic-led crisis, the company has enforced a variety of measures including company-wide hiring freeze, substantial cost cuts, staffing-level adjustments, postponement of $150 million in capex and negotiated rent deferrals at different locations for up to 90 days.

Additionally, executive and management compensation has been drastically slashed, including a 100% pay cut for the CEO and president during the crisis. The board of directors has also suspended cash compensation through September-end of this year.