Formula One driver Max Verstappen says it was a “big relief” to see Romain Grosjean jump out of his car after a horrific crash at the Bahrain GP on Sunday.


The incident occurred on the third corner of the first lap as Grosjean plowed into the barriers following contact with Daniil Kvyat.

The Frenchman said he “saw death coming” after the car split in half and was instantly engulfed in flames.

Dramatic live footage showed Grosjean jump out from the burning wreckage after what he says was 28 seconds.

“It was a big relief to see Romain jumping out of the car. You can really see the safety of Formula One cars. It was incredible that he basically jumped out of the car like that,” Verstappen told CNN Sport.

“At the time, when we were driving back to the pits, I could see the flames which were very scary.

“I was asking on the radio, ‘Is he out? Is he out?’ Then we saw the footage that he did jump out and that’s the most important thing.

“Then you just have to wait for the injury report but luckily it wasn’t too bad.”

Grosjean was rushed immediately to hospital where he was treated for minor burns on the back of his hands.

He was discharged from the Bahrain Defence Hospital (BDH) on Wednesday and will remain in the country to receive private treatment for his burns.

Verstappen says all drivers on the grid are fully aware of the risks involved in the sport and was determined to get back on the track to compete in Bahrain.

After a lengthy break, the race restarted and Verstappen eventually finished second behind Lewis Hamilton.

The Red Bull driver currently sits third in the driver standings having won one race this season.

© HAMAD I MOHAMMED/AFP/POOL/AFP via Getty Images
Stewards and medics attend to Romain Grosjean after the crash.

Black Friday has always been the day for shopping ’til you drop and scoring the best deals of the season. But this year, why not steer clear of the crowds and spend your day doing something you’d probably rather be doing anyway? And for a good cause, at that.

On November 27, the Rapha Foundation is hosting a worldwide virtual riding event to benefit the nonprofit World Bicycle Relief. For every 1,000 kilometers ridden by participants, Rapha is pledging to donate one bike to the organization.

World Bicycle Relief donates bicycles to people in need in rural communities all over the world. With these bicycles, a valuable form of transportation—sometimes the only form—in many communities, people can have access to education, better healthcare, and better livelihoods. 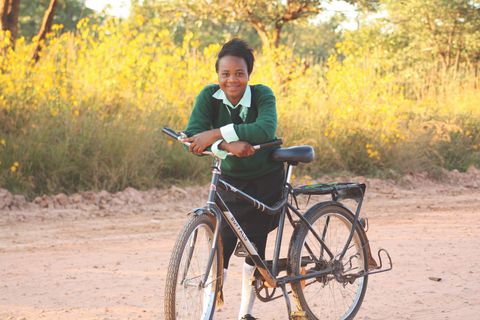 A recipient with her donated “buffalo bike” from World Bicycle Relief.

[Want to fly up hills? Climb! gives you the workouts and mental strategies to conquer your nearest peak.]

Rapha is tracking kilometers ridden with Strava, in the form of a Strava Challenge. Those interested in participating can sign up here. If you participate, you can ride as much or as little as you would like—all you need to do is save your Strava ride and set it as viewable to “Everyone.”

“This year has been tough for all of us. But amid the uncertainty, cycling has prospered as more people have ridden to get around or find release from restrictions,” said Rapha’s statement online. “At Rapha, we have benefitted from this but we realise that there are many cycling clubs and charities who have been more negatively impacted by the pandemic, and who need our support now more than ever.”

Along with hosting this charitable ride, Rapha won’t be offering sales online and will be closing their Clubhouses on Black Friday to encourage employees and customers to get out and ride.

Jessica Coulon
Assistant Digital Editor
When she’s not out riding her mountain bike, Jessica reports on news, gear, and all things cycling related for Bicycling.

This content is created and maintained by a third party, and imported onto this page to help users provide their email addresses. You may be able to find more information about this and similar content at piano.io