A police vehicle was severely damaged after it was allegedly set on fire in Portland, Oregon, authorities said.

The unoccupied Portland Police patrol vehicle had been parked in a city fleet parking lot in the 800 block of North Graham Street when the blaze broke out, Portland Police said in a news release.

Officers responded to the parking lot after a report of a vehicle on fire at around 8.20 p.m. on Saturday, police said. Portland Fire and Rescue also responded and extinguished the flames.

The cause of the fire is under investigation, but arson is suspected, according to police. No arrests have been made and police said no suspect information was available.

Police said the vehicle was a fully marked 2018 Portland Police Ford Interceptor Utility vehicle. It had been involved in a minor crash and had been towed to the parking lot for body damage repairs.

The incident occurred after an outdoor kitchen across from the federal courthouse in downtown Portland was robbed at gunpoint and heavily vandalized in the early hours of Saturday morning.

Police said officers were dispatched to the 1000 block of Southwest Third Avenue after a report of a disturbance involving a weapon at around 2.30 a.m. on Saturday.

Officers spoke with a man who said he was working in the kitchen when he was robbed by a group of about a dozen suspects, including one who was armed with a shotgun, police said in a news release.

“The suspects also heavily damaged the victim’s car parked next to his canopy.”

The incident took place near the Mark O. Hatfield United States courthouse, the scene of months of protests since the May 25 killing of George Floyd.

Floyd, a Black man, died after a Minneapolis police officer knelt on his neck for more than eight minutes despite his pleas that he couldn’t breathe.

Over the summer, the Trump administration deployed federal agents to Portland in a bid to quell the protests. That prompted nightly clashes that saw
federal agents stationed at the courthouse fire tear gas or less-lethal munitions at protesters on several occasions.

...
Read More
Transportation ballot initiatives did well on Election Day, but not in Portland 2 min read

Transportation ballot initiatives did well on Election Day, but not in Portland

In the Nov. 3 elections, voters surprised infrastructure experts by passing the vast majority of local public transportation funding items put before them. The big exception to that was voters in Oregon’s Metro district. They voted against a payroll tax to pay for infrastructure improvements, including a MAX light rail extension.


Voters in the Metro district, which includes Clackamas, Multnomah, and Washington counties, rejected the “Get Moving 2020” measure, 58% to 42%. The vote in Portland was closer but still against the measure, 54% to 46%.

The failed measure would have created a new 0.75% payroll tax on businesses with 26 or more employees to fund an extension of the light rail to the city of Tualatin, the construction of a new bridge over the Clackamas River, the conversion of public transportation buses to run on electricity, more street lights, and free bus and MAX fares for minors, among other things.

Romic Aevaz is a policy analyst at the Eno Center for Transportation in Washington, D.C. He told the Washington Examiner that transportation measures fared “extremely well” overall.

“There was some uncertainty over whether these measures would fare differently this year, given the pandemic, but these margins show that voters were, by and large, supportive of transit investments and willing to tax themselves to pay for major expansions and operational expenses over the long term,” he said.

Aevaz called the Metro-Portland vote the “notable exception.” He speculated that a left-right peel-off was responsible for its defeat.

“I suspect that pushback and opposition campaigns from big business over the new payroll tax and their claims that it would impact hiring may have played a role. My understanding is that there was also pushback among some otherwise progressive pro-transit voices over whether the measure went far enough, was too car-centric in its approach, or whether the proposed light rail line was a worthwhile alignment. I can’t say whether it was the big business pushback or the pushback about the merits of the measure that played the largest role, but I think these two dynamics likely played a combined role in the defeat,” Aevaz said.

Vlad Yurlov is a policy analyst with the Portland-based Cascade Policy Institute. He said he believes the problem was not with the opposition but with the measure itself.

“Get Moving 2020 failed because it was based on spending $2 billion on extending a light rail line that has continuously failed expectations. Meanwhile, only 3% of the measure supported necessary traffic congestion relief,” Yurlov told the Washington Examiner.

“Residents and businesses that regularly supported transportation improvements stood up to a measure that not only demanded another payroll tax but didn’t serve their needs,” he added.

The Washington Examiner reached out to several locals to ask why they voted the way they did on the measure.

Paul Willenberg is an online sake retailer in Portland. He opposed the transportation measure.

“I voted no because taxing businesses results in lower wages for 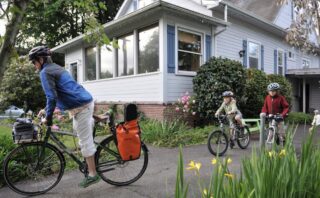 A family leaves for a ride in Sellwood.
(Photo © J. Maus/BikePortland)

The coronavirus has changed our lives forever. From here on out, we will think of life before coronavirus, and after. While these are very scary times, we are seeing some positive things appear. With calmer streets and less people driving, there’s been a surge of children and families riding bikes together.

If you’re one of them, it might be a good time to do a practice run to school (if you don’t bike there already).

As a Physical Education teacher at a K-8 school in north Portland I see daily the impacts physical activity — or lack thereof — has on my students’ well-being. In PE class we work to give children the skills they need to be a physically literate person. We are building students’ competence and confidence so they can live a healthy life.

I tell my students that doctors have studied why being physically active is important for children. The closer children are to the 60 minutes of physical activity recommended by the Center for Disease Control, I tell them, the better health outcomes they’ll see. Children who are more active do better in school, get in less trouble, have better relationships with friends, get sick less and live longer lives.
[Read more…]

Thanks for reading BikePortland.

Please consider a $10/month subscription or a one-time payment
to help maintain and expand this vital community resource. 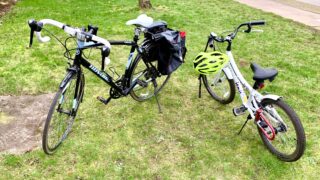 When I started this car-free adventure at the beginning of winter, I thought for sure my bike was not going to cut it. I thought it was a matter of time when I’d have to admit my little road bike just wasn’t the right bike for hauling groceries or getting me around town. I was 99% convinced I’d have to trade it in when I first started my daughter behind me on her little tag-a-long, and her lack of experience balancing nearly caused us a few bike dumps.

I had been looking up more “upright” and heavier/sturdier bikes, what I came to find out are called “mixte” bikes, when to my surprise, we all adapted rather quickly. My daughter started riding on her own, I got into a cadence with groceries, and I do really love having a super light and maneuverable bike when I want to go from North Portland to Montavilla.[Read more…] 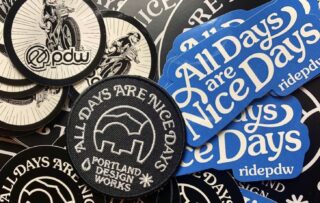 It’s strange that while many things have slowed down or paused during these virus-impacted times, there seems to be more news than ever coming toward us. Even as owner of a niche transportation media outlet,