At Flash Memory Summit this week (online for the first time), Western Digital is showing off three new SSD products and have outlined the company’s areas of strategic focus in a keynote presentation. 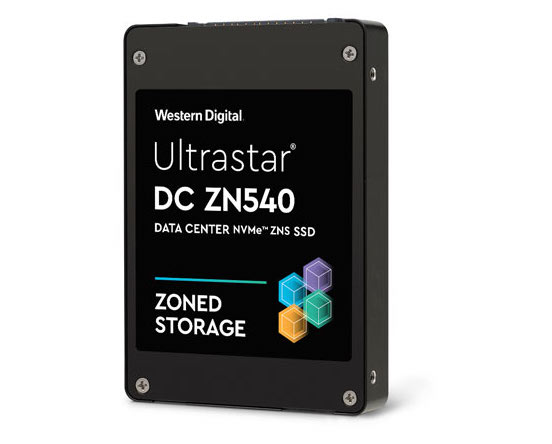 First up, Western Digital is commercializing NVMe Zoned Namespaces (ZNS) technology with the new Ultrastar DC ZN540 datacenter SSD. We covered ZNS in depth earlier this year after the extension to the NVMe standard was ratified. Western Digital has been one of the strongest proponents of ZNS, so it’s no surprise that they’re one of the first to launch a zoned SSD product.

The ZN540 is based on a similar hardware platform to their existing traditional enterprise/datacenter SSDs like the Ultrastar DC SN640 and SN840. The ZN540 is a 2.5″ U.2 SSD using 3D TLC NAND and a Western Digital-designed SSD controller, and offers capacities up to 8TB with dual-port PCIe 3.0 support. The most significant hardware difference is a big decrease in the amount of RAM the SSD needs compared to the usual 1GB per 1TB ratio; Western Digital isn’t ready to disclose exactly how much RAM they are shipping in the ZN540, but it should be a nice decrease in BOM.

The new ZN540 also renders the Ultrastar DC SN340 mostly obsolete. The SN340 was designed to get some of the benefits of a zoned SSD by using a Flash Translation Layer that works with 32kB blocks instead of the usual 4kB. That enables a DRAM reduction by a factor of eight, at the expense of much lower random write performance, especially for small block sizes. ZNS SSDs simply prohibit random writes in the first place rather than silently deliver horrible performance with extremely high write amplification, and the ZNS interface allows software to be properly informed of these limitations and provides tools to cope with them.

The Ultrastar DC ZN540 is currently sampling to major customers. Software support for ZNS SSDs is fairly mature at the OS level in the Linux kernel and related tooling. Application-level support for zoned storage is more of a work in progress, but Western Digital and others have been hard at work. Zoned storage backends already exist for some well-known applications like the Ceph cluster filesystem and RocksDB key-value database. 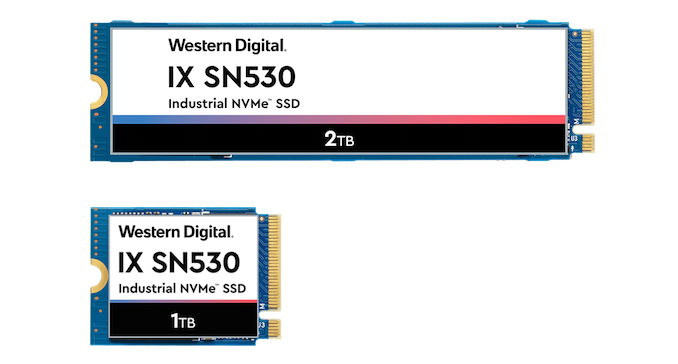 Next up, Western Digital is introducing their first industrial-grade NVMe SSD. Western Digital’s industrial and automotive lineup currently consists of eMMC and UFS modules and SD/microSD cards. The new Western Digital IX SN530 NVMe SSD is an industrial/automotive grade version of the PC SN530, OEM counterpart to the retail SN550. These are DRAMless NVMe SSDs, albeit some of the best-performing DRAMless SSDs on the market. The IX SN530 will be available with capacities of 256GB to 2TB of TLC NAND, or operating as SLC NAND with capacities of 85-340GB and drastically higher write endurance. One of the main target markets for the IX SN530 will be automotive applications, where the push toward self-driving cars is increasing storage capacity and performance requirements.

The TLC-based variants of the IX SN530 are