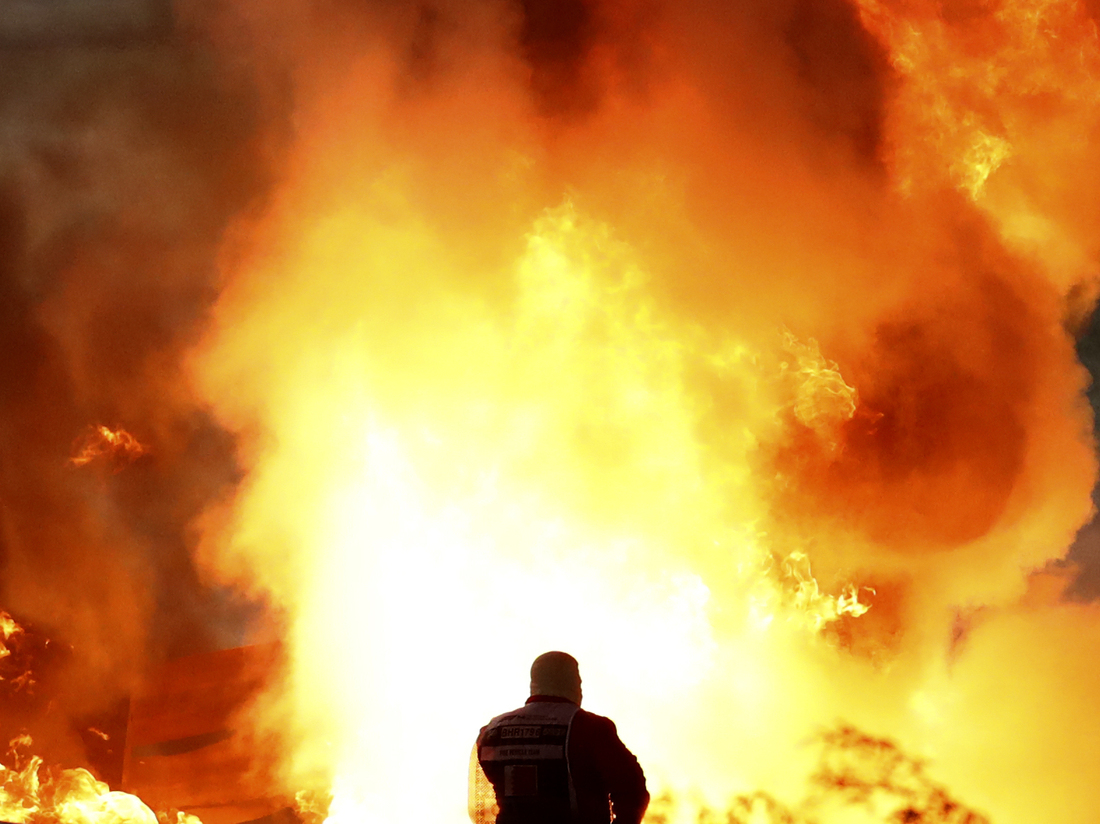 Staff extinguish flames from Haas driver Romain Grosjean of France’s car after a crash during the Formula One race in Bahrain International Circuit in Sakhir, Bahrain, Sunday. 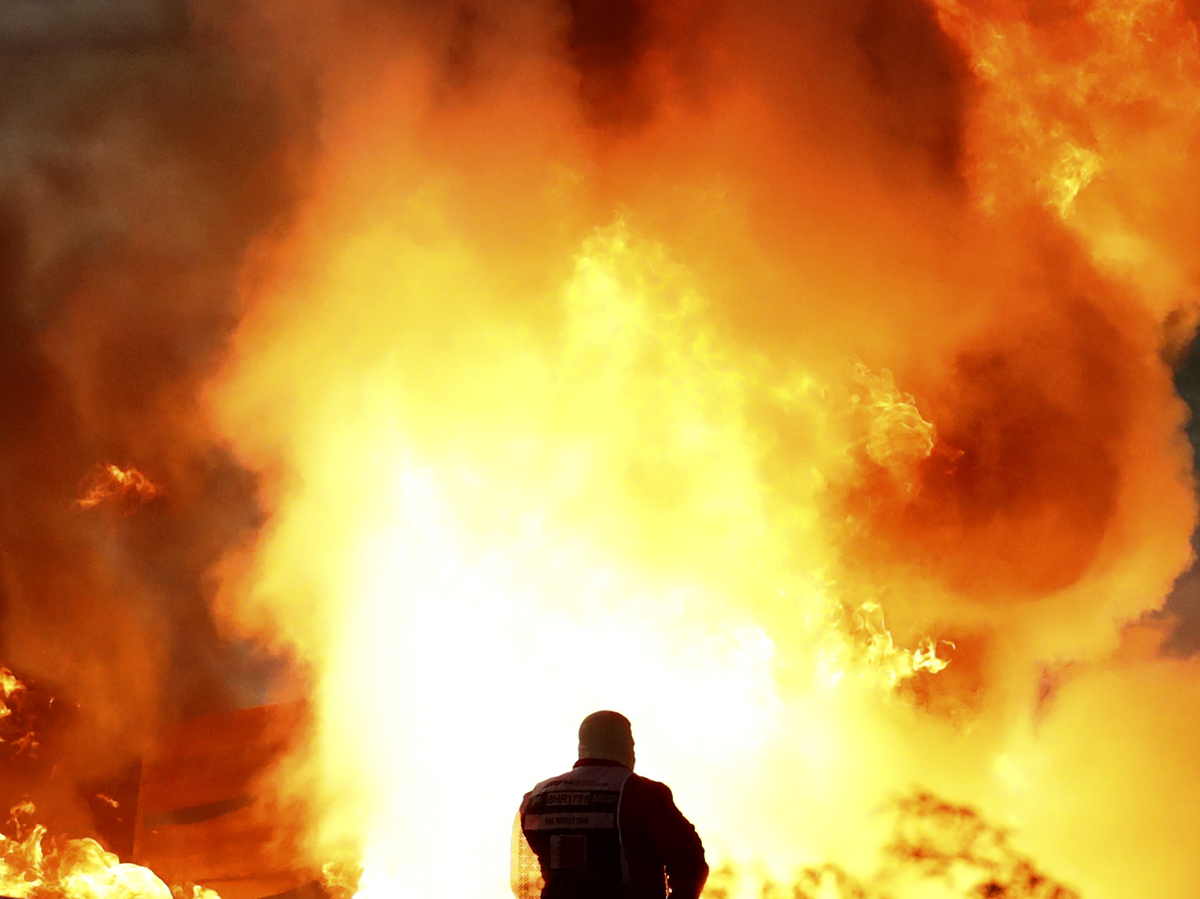 Staff extinguish flames from Haas driver Romain Grosjean of France’s car after a crash during the Formula One race in Bahrain International Circuit in Sakhir, Bahrain, Sunday.

Romain Grosjean’s car violently hit a barrier, split in half and erupted in flames during the first lap of Formula One’s Bahrain Grand Prix on Sunday.

The race was halted and Grosjean, who miraculously made it out of his car without life-threatening injuries, is currently being treated in a Manama hospital.

It’s the most serious accident in the sport in years.

The French Haas driver clipped Daniil Kvyat’s car early on in the race, and just after the third corner, veered off the track. Kvyat told Sky Sports that he was initially “angry” at Grosjean for turning into him, but his “mind changed immediately” when he saw Grosjean’s car smash through the barriers, break in half and explode. About 18-20 seconds later, Grosjean emerged from the wreckage.

“Romain is doing okay, I don’t want to make a medical comment but he had light burns on his hands and ankles,” Haas Team Principal Guenther Steiner said in a statement. “Obviously he’s shaken … I want to thank the rescue crews who are very quick. The marshals and FIA people, they did a great job, it was scary.”

Formula One’s governing body, the Fédération Internationale de l’Automobile, said Grosjean was immediately attended to by emergency and medical crews and remained conscious at all times. He was flown to the Bahrain Defence Force Hospital where he is currently being evaluated.

“In 12 years I’ve never seen that much fire,” medical car driver Alan van der Merwe told Sky Sports. “Then Romain just started to get out of the car himself, which is pretty amazing after an incident like that. It just goes to show all the systems, the halo, the barriers, the seat belt, all worked as they should. Without even one of those things it could have been a very different outcome.”

The curved bar that surrounds a driver’s head known as a halo, which was potentially instrumental in Grosjean’s survival, was only added to all Formula One cars in 2018. There was some criticism about the additional safety equipment at the time, including one driver who said it destroys the “looks of the car” and fans who found it visually unappealing. But on Sunday, it appeared to have helped save Grosjean’s life, and it wouldn’t be the first time it increased safety for drivers. Drivers Tadasuke Makino, Charles Leclerc and Alex Peroni have all credited the halo for possibly saving their lives in separate crashes.

Seven-time world champion driver Lewis Hamilton, who went on to win Sunday’s Grand Prix, tweeted that he is “grateful” for Grosjean’s safety and reminded viewers that the risk drivers take is

…...
Read More
How Long Does It Take To Charge An Electric Car? : NPR 2 min read

How Long Does It Take To Charge An Electric Car? : NPR 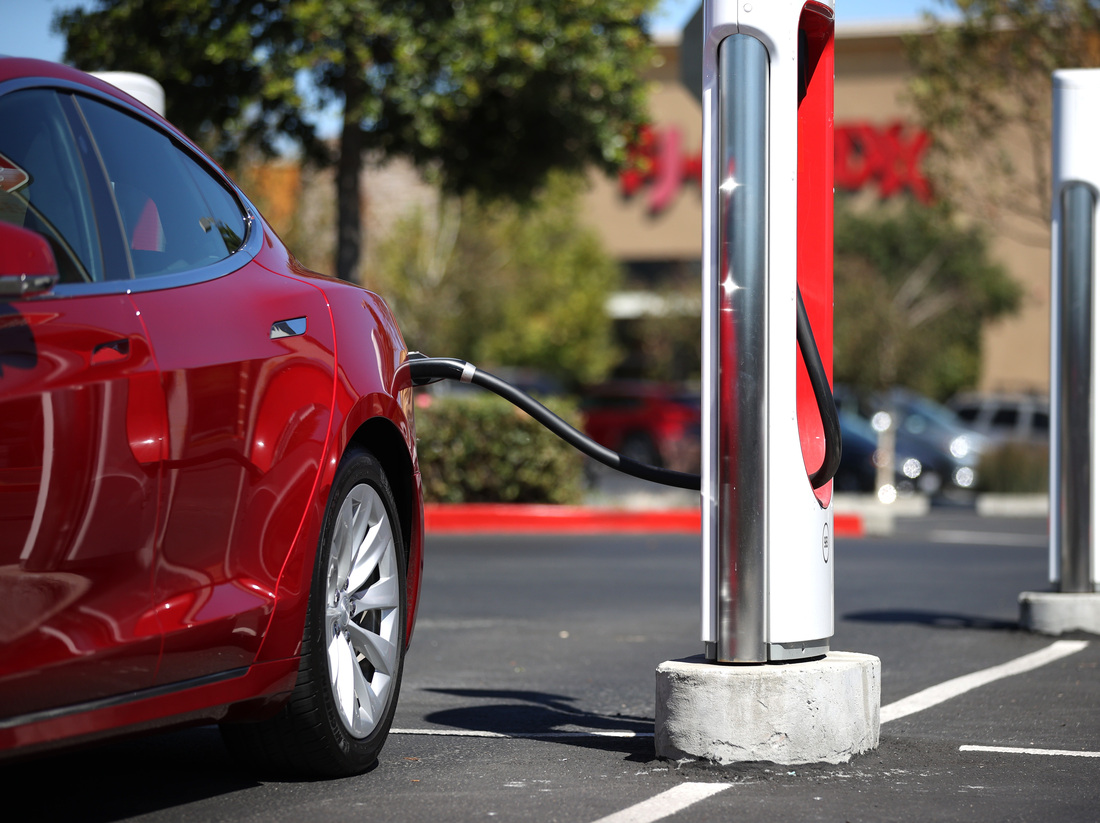 A Tesla car powers up at a charging station in Petaluma, Calif. on Sept. 23, 2020. Auto makers are trying to convince would-be electric car buyers to adopt new habits to power their vehicles. 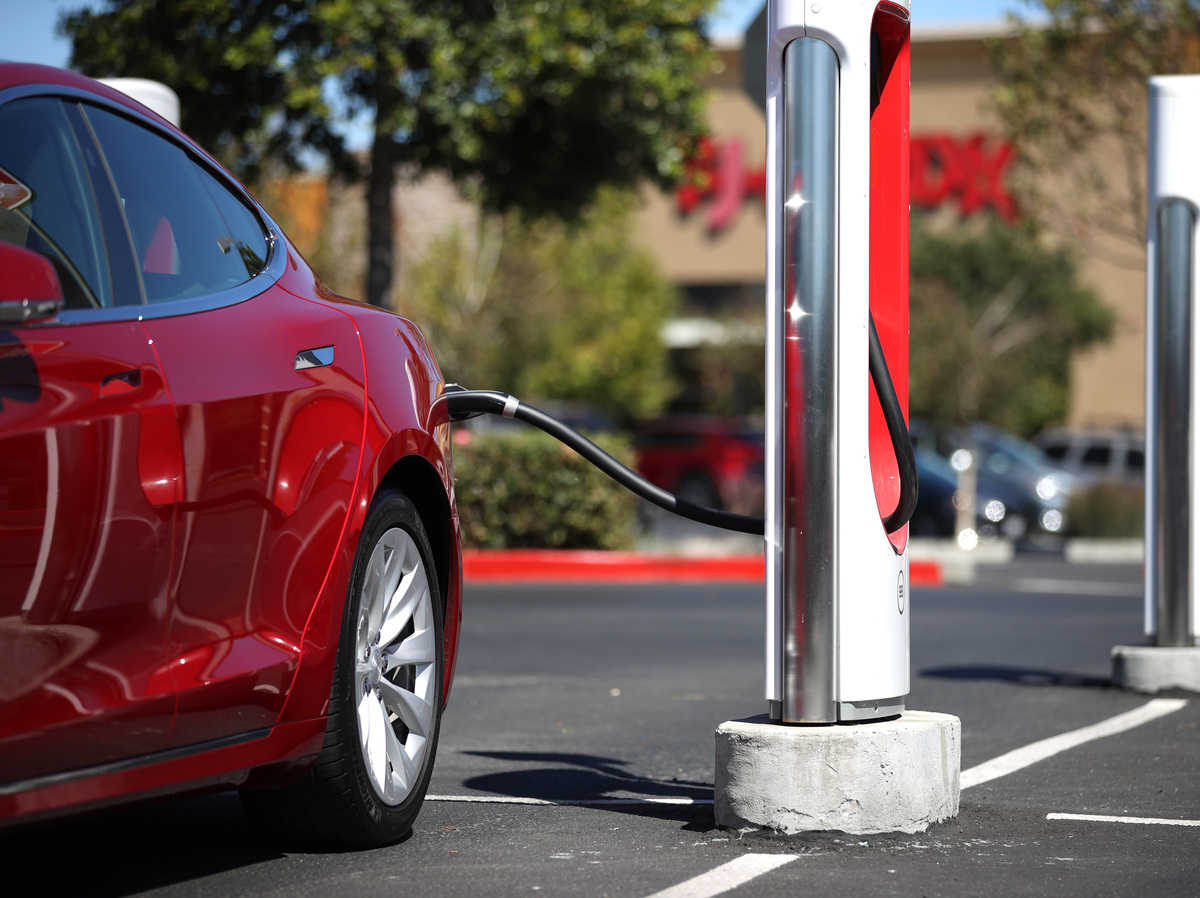 A Tesla car powers up at a charging station in Petaluma, Calif. on Sept. 23, 2020. Auto makers are trying to convince would-be electric car buyers to adopt new habits to power their vehicles.

How long does it take to charge an electric vehicle? The question is more complicated than it seems, and that’s a challenge for the auto industry.

And no matter what charger a driver uses, an electric vehicle requires a change in habits. That may be an obstacle for automakers who need to persuade sometimes skeptical car buyers to try their first electric vehicle.

Most owners charge at home or at work. The process takes hours, which might sound like an unbearable hassle to owners of gas-powered cars. But for current owners it feels much more convenient than a gas station trip because they’re doing other things — in many cases, sleeping — while the battery recharges.

The slowest way to charge is on a standard 120-volt outlet, which adds just a few miles of range per hour.

“I don’t have a driveway or a garage so I have to run an extension cord,” says Andy Fraser, who parks his Volkswagen e-Golf on the street and plugs it in to a normal household outlet. It takes him 12 full hours to add 50 miles of range.

But 50 miles is all Fraser usually needs. And his car would be parked overnight anyway, when he usually does his charging.

The next step up is a 240-volt level 2 charger. The speed varies, but 15-25 miles added per hour spent charging is typical.

David Cooper, who drives a Nissan Leaf, used to charge on a standard outlet at work, but persuaded his condo building to add two public level 2 chargers.

“The vast majority of the charging I do now is at home,” he says. He plugs his Leaf in overnight, and schedules it to charge between 2 and 6 a.m. In those four hours, it adds around 100 miles of range.

Many shared chargers at workplaces, restaurants and other public locations are level 2 chargers, but they can also be installed at private homes; the cost can range from a few hundred to a few thousand dollars.

Clemens Mendell is a realtor and puts a lot of miles on his Tesla Model X. But no matter how much he drives in a day, his car is ready for him the next morning.

He plugs into the level 2 charger in his garage when he gets home, and the car waits to charge until his 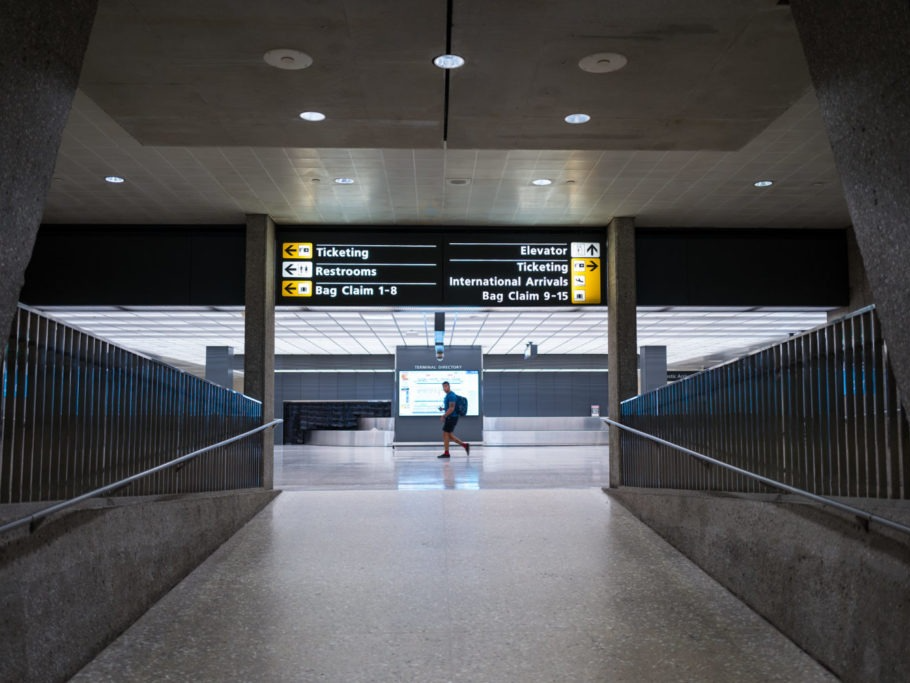 Dulles International Airport is expected to be a lot less busy this Thanksgiving.

Despite officials and experts advising against it, some locals will still be traveling for Thanksgiving. And the region’s transportation agencies and companies are communicating a number of precautions and measures in hopes of keeping them healthy and safe from COVID-19 during what is typically the busiest travel period of the year.

At Reagan National Airport and Dulles International Airport (which are both run by the Metropolitan Washington Airports Authority), face coverings are required at all times and complementary masks are available at information counters. The airports also have “thousands of social distancing stickers” on the floor to remind folks about staying separated.

There are also more than 700 hand-sanitizing stations throughout both airports.

However, unlike a number of others across the country, regional airports currently do not have any testing sites.

Amtrak is partnering with the George Washington University Milken Institute School of Public Health on safety measures. Face masks are required at Union Station as well onboard throughout a train trip.

The train station also has social distancing stickers and the Amtrak website says cleanings are being done using EPA-registered disinfecting wipes. Boarding times are extended and fewer seats are being sold in order to reduce crowding. Additionally, on all Amtrak trains there are filtration systems that generate a full fresh air exchange every four to five minutes.

A majority of bus companies with local routes — Greyhound, Megabus, and Washington Deluxe — run out of a hub at Union Station. All are requiring face masks when boarding and walking around the bus, limiting the number of tickets sold, enhancing cleaning, and touting their air filtration systems. Greyhound, however, specifically notes that if you are unable (or unwilling) to wear a face covering, including due to a medical condition, they “regret that you will not be able to travel on Greyhound at this time.”

The bus company is also advertising that they are now “ozonate” each bus, which is a sanitation process more often used to prevent the spread of waterborne diseases. While studies are ongoing, some have determined the process to be “potentially useful” against the coronavirus.

As this has been a year like no other, it’s difficult to predict how many people will travel for the holiday. During a normal Thanksgiving week, a lot of people come and go in the D.C. region. Last year, it was estimated that nearly 1.35 million left town. About 100,000 locals flew and more than 105,000 train trips came through Union Station.

This year, the number will drop significantly. Air travel is expected to decline by nearly half nationwide compared to last year, according to AAA estimates. The number of people traveling by bus, train, and cruise is estimated to drop by more than 75% from last year’s level, due to the pandemic.

Earlier this month, D.C. Mayor Muriel Bowser instituted a travel advisory requiring those who are visiting D.C. or 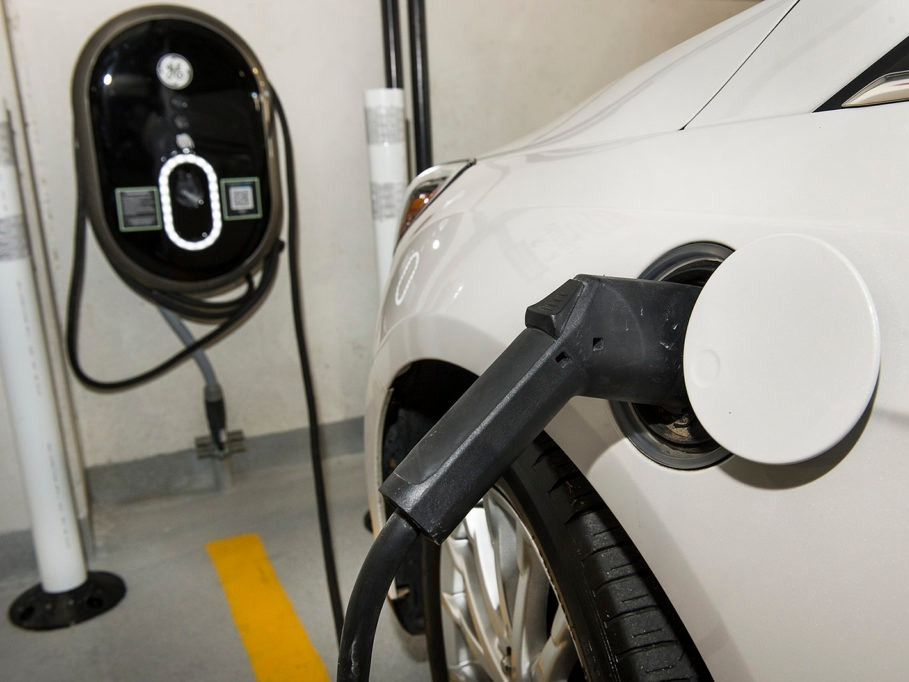 A bill going through the D.C. Council would mandate 20% of parking spots in new or renovated commercial and apartment buildings have electric vehicle charging infrastructure.

The D.C. Council wants to “future-proof” new commercial and apartment buildings in the District for an electric vehicles.

A bill going through Council would require that at least 20% of parking spots in new or renovated commercial and apartment buildings have the infrastructure to allow for future electric vehicle charging.

The council voted unanimously Tuesday to approve the measure. It still has one final vote from the council and needs Mayor Muriel Bowser and Congress’ approval. The bill was introduced last year by Councilmember Mary Cheh (D-Ward 3) and co-sponsored by seven others.

A Bloomberg report estimates nearly 60% of new car sales will be electric in the next 20 years, though access to charging is among buyers’ top concerns about electric vehicle ownership.

Cheh said the Council wants to see the District’s population transition to electric vehicles (and public transit, walking and biking) to help meet its climate goals, but they hope eliminating the concerns about charging would help spur more electric vehicle ownership. D.C. hopes to be a carbon-neutral city by 2050.

The rule would apply to buildings with five or more units that have three or more parking spaces. If approved, it would go into effect in January 2022. It does give some leeway, as the District can grant waivers to owners who say they have severe financial hardship.

Cheh says a building with 100 total parking spots would spend less than $20,000 to comply with the act.

“It makes economic sense for building owners,” she said. “This says, ‘do it now while you’re building and it’ll cost you way less.'”

“And then when the time comes, if you want to put in charging stations, you’ll pay much less. And your tenants who now have these electric cars will be much happier.”

Councilmember Anita Bonds (D-At Large) questioned whether 20% was the right amount. Cheh argued that would be a conservative amount if trend predictions are correct, saying tenants will also likely pressure building owners for that amenity.

“The District is one of the states with the highest percentage of residents living in multi-unit dwellings. According to the 2009 – 2013 census, 58% of its residents are renters, and 62% of its housing units are in multi-unit structures,” Patrick Bean, Global Charging Policy Lead for Tesla wrote last year. “The lack of charging