USA TODAY Sports’ Mackenzie Salmon spoke with Paul Myerberg about the state of college football amid a pandemic.

“It was not similar,” Ryan Thompson of the Baton Rouge public defender’s office said Thursday. “It was 100 percent, spot on accurate. It’s inexplicable. Two college-age kids are about to get in their own vehicle and go to Cane’s. Then four white police officers come out of the car with guns drawn.”

Thompson, who is representing Moore, said he was allowed to view the footage, courtesy of police chief Murphy Paul. He is trying to get the footage released to the public and considering a civil lawsuit against the police department.

Moore’s accusations spelled out on his Twitter account from an incident early Sunday morning resulted in three officers being placed on administrative leave Monday by Paul, pending an internal affairs investigation. 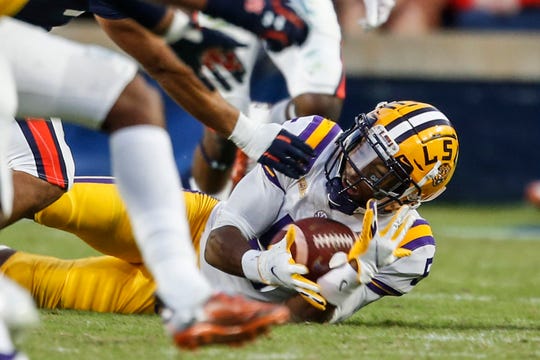 LSU wide receiver Koy Moore (5) catches a pass during the second half of an NCAA college football game against Auburn on Saturday, Oct. 31, 2020, in Auburn, Ala. (AP Photo/Butch Dill) (Photo: Butch Dill, AP)

Moore described four officers harassing him and Alabama wide receiver Traeshon Holden in an apartment complex parking garage near the LSU campus. Thompson said they were trying to leave the complex after 1:30 a.m. to get something to eat at a nearby Raising Cane’s restaurant, which is open until 3:30 a.m.

“The officers repeatedly say, ‘Where’s the guns? Where’s the drugs?’ The two kids didn’t say or do anything that warranted that level of force,” Thompson said. “And there were no guns or drugs.”

Police were responding to a complaint called in about loud music being played at a party on the roof of the LSU student-populated apartment complex with approximately 200 people, according to a police report.

“These kids were not at the party,” Thompson said. “They were not drunk. These kids are well-oiled machines. They looked alert. The police didn’t say they smelled marijuana or alcohol and didn’t ask if they had been drinking. Just, ‘Where’s the guns? Where’s the drugs?’ “

Moore said one of the officers unzipped Moore’s pants looking for a weapon, and Moore said he felt violated.

Holden, a freshman wide receiver for the Crimson Tide, is a friend of Moore’s from various elite prospect camps they went to together while being recruited in high school. Holden went to Narbonne High School in Harbor City, Calif., near Los Angeles.

Moore is a freshman who signed with LSU as a four-star prospect out of Rummel High in Metairie.

Thompson is not representing Holden but has spoken to his family about the incident.

LSU and Alabama each had open dates last Saturday, and players from both teams were off for the weekend. Holden visited Moore in Baton Rouge. They were playing video games until late Saturday night and early Sunday morning, Thompson said.

LSU and Alabama were scheduled to play in Tiger Stadium this Saturday, but the game was postponed because of a recent COVID-19 outbreak on the LSU team. The Southeastern Conference is trying to find a date to reschedule the game.

Moore told Thompson the harassment stopped only when both he and Holden said they were football players. Neither player was arrested.

“Then it stopped,” Thompson said.

Orgeron spoke about the incident on Monday.

“I met with Koy and his mom this morning to find out exactly what happened,” Orgeron said. “We do everything to support Koy and his family. There’s no place in America for racism or social injustice. I want to thank Chief Murphy Paul for acting quickly, investigating this.”

“We are trying to get the bodycam released,” Thompson said. “I doubt it will be released in the next few days, but we are moving toward that.”

Thompson said he was able to view it “because Baton Rouge Police chief Murphy Paul has been very transparent along with the mayor (Sharon Weston Broome).”

[email protected]_84 16 hours ago
I-40 westbound closed near I-65 in North Nashville; vehicle overturned 2 min read